Are You My (Heavenly) Mother? 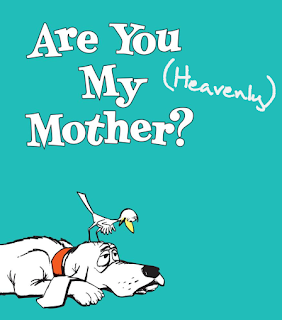 (Adapted from a Sacrament Meeting talk given on March 11, 2018, Mothering Sunday in the UK)

As Zina Young (who later became the third General Relief Society President) was grieving the death of her mother, she asked Joseph Smith “Will I know my mother as my mother when I get over to the Other Side?” The prophet responded, "Certainly you will. More than that, you will meet and become acquainted with your eternal Mother, the wife of your Father in Heaven".1

One of the most cheerful doctrines embraced by the Church of Jesus Christ is that we know we have, in addition to a Father in Heaven, a Mother in Heaven.

In a Gospel Topics Essay we read “The doctrine of a Heavenly Mother is a cherished and distinctive belief among Latter-day Saints… All human beings, male and female, are beloved spirit children of... a Heavenly Mother.”2

Unfortunately, for such a cherished part of our doctrine, Heavenly Mother is spoken of surprisingly rarely at Church. At times, searching for truths about Her in the scriptures reminds me of P. D. Eastman’s book, Are You My Mother?4

In this children’s book, a baby bird hatches while his mother is away looking for food. He sets out to look for her, asking all the animals he meets “Are you my mother?” The other animals and even an airplane each turn him away; “I am not your mother,” they say. The baby bird starts to feel hopeless in his search - abandoned and alone. Sometimes, seeking knowledge of our Heavenly Mother might start to feel the same way.

Fortunately, modern prophets and Church leaders have revealed many precious truths about our Mother in Heaven. Despite rumors to the contrary, no General Authority of the Church has ever taught that we should avoid speaking of Her, nor have they given any reason as to why relatively little information has been revealed.5

Joseph Smith privately introduced the doctrine of Heavenly Mother early in the Church on several occasions. Those who heard him recorded these teachings in journals, interviews, and poems. The most prominent example is Eliza R. Snow’s popular hymn, O My Father (which she originally titled Invocation or The Eternal Father and Mother).6
“In the heav’ns are parents single?” Eliza asks. “No, the thought makes reason stare!/ Truth is reason; truth eternal/ Tells me I’ve a mother there.”7

From records such as these, we learn that our Heavenly Mother is completely united and equal with our Heavenly Father.

Susa Young Gates (daughter of Brigham Young, Founding Editor of the official Relief Society Magazine, and prominent suffragette) quoted Joseph Smith as saying “The divine Mother, [is] side by side with the divine Father and [has] the equal sharing of equal rights, privileges and responsibilities.”8 Indeed, James E. Talmage referred to her as “our God Mother.”9

Elder Erastus Snow of the Quorum of the Twelve emphasized Her undoubtable godhood. “Do [I] mean we should understand that Deity consists of man and woman?” he rhetorically asked. “Most certainly I do. If I believe anything that God has ever said about himself... I must believe that deity consists of man and woman... There can be no God except he is composed of the man and woman united, and there is not in all the eternities that exist, or ever will be a God in any other way.”10

The Mother not only has a relationship with the Father, but with each of us as well. Brigham Young revealed, “we were created. . . in the image of our father and our mother, the image of our God.”11 Spencer W. Kimball taught women, “You are daughters of God… You are made in the image of our heavenly mother.”12 Elder Rudger Clawson of the Quorum of the Twelve explained, “We honor woman when we acknowledge Godhood in her eternal Prototype.”13

We have also been taught that Heavenly Mother plays an active role in our current lives. Harold B. Lee taught, “we have a... Heavenly Mother who [is] even more concerned, probably, than our earthly father and mother, and that influences from beyond are constantly working to try to help us.”14 Spencer W. Kimball added, “Knowing how profoundly our mortal mothers have shaped us here, do we suppose [our Heavenly Mother’s] influence on us as individuals to be less?”15

Many of the particular ways our Mother in Heaven influences us have not yet been revealed, but Church leaders have repeatedly emphasized that She plays a critical role in the world to come. Elder John A. Widtsoe anticipated that the afterlife "is given radiant warmth by the thought that ... [we have] a mother who possesses the attributes of Godhood."16

I believe this is to what the LDS poet and scholar Rachel Hunt Steenblik was referring when she wrote “She is what I mean/ when I say, I want/ to go home.”17

This homecoming will be made more sweet by how familiar we find our Mother in Heaven. Chieko Okazaki, a former counselor in the General Relief Society Presidency, taught that “At the end of this process, our Heavenly Parents will have sons and daughters who are their peers, their friends, and their colleagues.”18 Glenn L. Pace of the First Quorum of the Seventy promised, "I testify that when you stand in front of your heavenly parents in those royal courts on high and look into Her eyes and behold Her countenance, any question you ever had about the role of women in the kingdom will evaporate into the rich celestial air, because at that moment you will see standing directly in front of you, your divine nature and destiny."19

At the conclusion of Are You My Mother?, the baby bird is reunited with its mother.

He looks at her and recognizes that she is unlike any of the other animals he has spoken to. Rather, she is like him.

Based on what Church leaders have taught, I imagine that reuniting with our Celestial Mother might be very similar. She will be unlike anyone we have ever before met, and yet will feel so familiar. In that moment, we will not need to ask who She is. We will know she is our Eternal Mother.

In honor of our wonderful Mother in Heaven, as we read the scriptures and listen to the words of living prophets, let us look for references to both of our Heavenly Parents, those wonderful beings whom we aspire to emulate, and with whom we can eventually share a glorious reunion.

“Father, Mother, may I meet you/ In your royal courts on high?/ Then, at length, when I’ve completed/ All you sent me forth to do,/ With your mutual approbation/ Let me come and dwell with you.”
Eliza R. Snow21

Additional reading on the Divine Mother:

"A Mother There": A Survey of Historical Teachings about Mother in Heaven, by David L. Paulsen and Martin Pulido https://byustudies.byu.edu/content/mother-there-survey-historical-teachings-about-mother-heaven

What I first learned about Heavenly Mother, by Rachel Hunt Steenblik
https://www.the-exponent.com/what-i-first-learned-about-heavenly-mother/

4 P. D. Eastman, Are You My Mother? (Random House Children's Books, 1960); I believe Rachel Hunt Steenblik was the first to draw the connection between Heavenly Mother and this book in her poem of the same name, published in Mother’s Milk: Poems in Search of Heavenly Mother (By Common Consent Press, 2017).

5 David L. Paulsen and Martin Pulido, "'A Mother There': A Survey of Historical Teachings about Mother in Heaven," BYU Studies 50, no. 1, 75-76, https://byustudies.byu.edu/content/mother-there-survey-historical-teachings-about-mother-heaven (accessed May 6, 2018).

12 Steenblik, "What I first learned".

Popular posts from this blog

Ranking all 341 Latter-day Saint hymns from worst to best: Part I

November 16, 2018
Ranking things in Latter-day Saint culture is a bit taboo. I’ve frequently heard folkloric rules against having favorite scriptures or General Authorities. We’re discouraged from shopping around for better wards, we’re told not to compare Church callings, and we’re certainly  not supposed to judge people . But ranking hymns is okay. Elder Bednar has a  favorite hymn . So did Joseph Smith . With the Church actively seeking help revising its hymnbook, the time has never been better to share which hymns you like and which you don’t. Since I’m always up for devoting way too much thought and energy to a relatively simple task, I decided to rank all 341 current hymns on one simple criteria:  how much do I want this hymn to be in the new hymnbook? I wasn’t familiar with many hymns and I wanted to do this fairly, so I went through the hymnbook cover-to-cover three times, listening to  LDS.org’s various recordings of each hymn as I went, giving each hymn a score between 1 t
Post a Comment
Read more

November 20, 2018
The final section of a five part series analyzing and ranking each hymn in the Latter-day Saint hymnal, including the top 45. Read Part I, including an explanation of the project and its methods, here Read Part II here Read Part III here Read Part IV here Five Stars I have very little to criticize about the 45 best hymns. Each one fulfills all 10 Hymnandments : worship, accuracy, emotion, interest, simplicity, universality, symbiosis, non-cultiness, appropriateness, and rhyme. In other words, if any of these hymns doesn’t make it into the new hymnbook, I’m gonna riot. Who’s with me? Rank 45 223. Have I Done Any Good? Utah Jazz head coach Quin Snyder once found his team losing badly in an effortless performance. He rose to his feet and screamed “WAKE UP!” at his players (they rallied and won the game). Now, his intensity with those words are all I can think of as the chorus of this song begins. If I’ve done no good in the world today, it’s not a whispered “Wake
1 comment
Read more

November 19, 2018
Part IV of a five part series analyzing and ranking each hymn in the Latter-day Saint hymnal.  Read Part I, including an explanation of the project and its methods, here Read Part II here Read Part III here Read Part V here Four Stars Now we're getting to the really good ones. From this point on, most criticisms are fairly minor and each song has something wonderful. The four star hymns, however, aren’t quite perfect. Maybe they don’t carry quite as powerful an effect as the very best hymns, or perhaps they have some small weakness. Nevertheless, singing of any of the songs listed here will improve any meeting. Rank 122 197. O Savior, Thou Who Wearest a Crown This hymn contains what is absolutely the most beautiful poetry of any song in any hymnbook. Tragically, we never sing it due to its strange, cumbersome, and ill-fitting tune. Do the right thing, Church HQ, and give these words a melody that will let them glow. Rank 121 280. Welcome, Welcom
Post a Comment
Read more